COME THE DAY OF REVELATION

“Your brain and your mouth live in two different countries. Why?”
Gudrun von Schumann

The world is on the brink, Malandanti out of control and Rob Wallet wondering what he unleashed when he walked into an isolated house on a German mountainside in 2013. The last hope appears to be the Lost Valley, a choice that involves abandoning everything and everyone he’s ever known and leaving the real world behind forever.

The funeral of Jonathan Knight is the perfect time to release his posthumous unofficial biography of Toten Herzen. The band’s official biographer has disappeared clearing the way for an avalanche of rumours and gossip fuelled by Knight’s outrageous claims.

When Wallet is finally tracked down the price for leaving his newly found paradise is a lot of money. There’s also the small matter of writing and publishing the official biography of Toten Herzen, a task he embraces with the enthusiasm of a condemned man.

He is urged on by Frieda Schoenhofer who is also desperate to reclaim her lost realm in Hell, and a chance meeting in a London bookshop offers an audacious opportunity to orchestrate a hoax Rob Wallet would be proud of.

As all the pieces of the puzzle fall into place one solitary forgotten figure watches the unfolding events. With a drastically altered identity she emerges to add one final dramatic twist to the question the world has been asking for nearly fifty years; who are Toten Herzen?

When I wrote the summary above it sounded like an allegory: Rob Wallet going now to a better place. Throughout the writing of the novels I never intended any of it to be allegorical and I certainly didn’t expect to send Wallet off into the dark night.

But what was it all about? At its heart the TotenUniverse was an enormous bit of fun, a chaotic ride involving blood, sex and a lot of black humour. It brought together a lot of stuff and nonsense I’ve been interested in all my life: rock music, the supernatural, a bit of conspiracy and a good mystery. How could I resist writing these ideas and creating a new world?

Another reason was the rehabilitation of the vampire genre after it was successfully hijacked and repackaged for a middle-class youth audience. The Twilight and Vampire Diaries series may have brought a lot of pleasure to millions of readers, I don’t begrudge them that, but come on: vampires were never meant to be stalking teenage girls around American colleges!

Writing about the Malandanti was more problematic. The stories coincided with a virulent strain of jihadist terrorism and whilst writing the novels thousands died at the hands of these pious lunatics. How could I possibly question innocence against that kind of backdrop? My excuse is not that I think the innocent are guilty, but that it takes more than a terrorist to kill thousands; it requires a perverted geopolitical environment, a rapacious arms trade, a religious mindset that has lost all connection with morality, and a media that insists on simplifying complex problems for their own business interests.

Insurmountable problems? My own personal view is very pessimistic and maybe Wallet’s retreat into the lost valley is my projecting hope onto a hopeless situation. But as I said the novels are not allegorical, they’re not autobiographical, the vampires don’t represent anything other than a strand of folklore, the Malandanti is a borrowed term from Italian history and Frieda Schoenhofer is a name a lot of people will never pronounce correctly. (Shurn-hoffer.)

So when you turn the last page and read the final sentence, don’t go looking for messages that aren’t there, don’t feel sad for anyone, look back on where all this started: a musical project in Logic Pro, a newspaper article about 10CC and a Youtube video of the Sweet. From such inauspicious sources urban legends are born.

Come the Day of Revelation will be published in late 2022.

Where to find the Author Pages

All the novels in the TotenUniverse (except the ninth, Come the Day of Revelation) are available from all booksellers. If you want to read a title in your favourite e-format follow the links below.

Amazon for Kindle and paperback. Draft2Digital for Apple, Nook, Kobo and lots more. 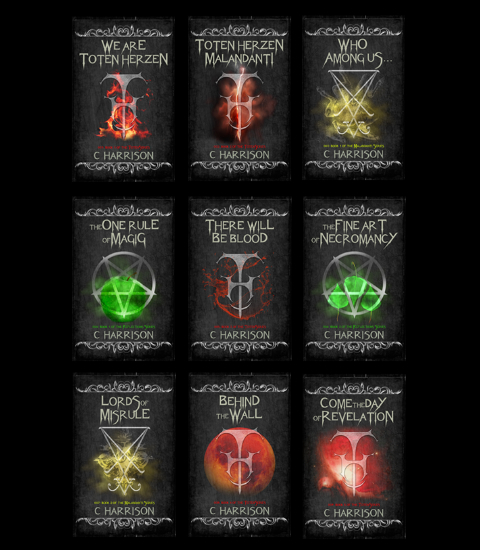